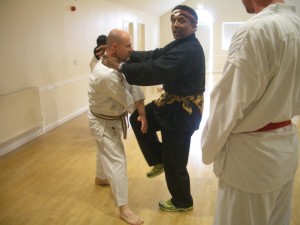 We have a lot of brilliant guest trainers visit us at the club, we learn and laugh a lot and our most recent visit was from Glen who gave us a small glimpse into Silat.

We started with blocking attacks to the head then throwing a counter attack for our partner to block. At first we did this slowly but then once we became more confident in our ability to block we had a bit of fun by adding some speed to our attacks.

During the lesson we were shown how to block attacks from weapons. To do this Glen had to use a ‘weapon’. I was so impressed at the concealment of the knife by Glen I no longer thought we were learning self-defence as it seemed more of an illusion and magic show. Then I became aware that the moves we just learned to attack and defend were the same techniques he was using, only with a weapon. This was a scary thought, just how lethal the attacks were when used with a weapon, especially one that you would not even know was there until it was too late.

As well as disarming and attacking we were shown small easy movements to take our attacker off balance, practising take downs are always fun. As always there were a few comical moments during our training, we were all shown what happens when you do not protect your face after Aaron and Ryan took many slaps to the face. They apparently enjoy having rosy cheeks.

It is great having a club that has so many guest trainers, it expands our knowledge and reminds us how much we have to learn. I hope Glen found us welcoming and will join us again soon.