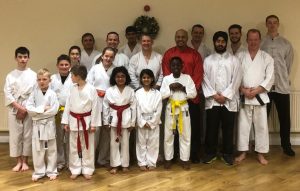 On Sunday 8th December Sifu Rob Simpson was once again welcomed into the Luton Higashi Dojo to continue the annual tradition of him conducting his seminar on Shao Lin and giving all the grades some lessons in this that would not come up in our normal Karate sessions.

This year was no exception. The higher grades were taught defences against the bo-staff: unarmed against armed. These defences included several take-downs leaving the higher grades somewhat bruised due the enthusiasm in which they were performed.

They were then taught defences against knife attacks: also unarmed against an armed attacker. These included some words of instruction by Sifu Simpson about the dangers of knives in general and how to react should you ever find yourself in that type of situation.

Sifu Simpson also brought 2 of his students with him to help instruct and demonstrate – Joel and Jit.

Under Sifu Simpson’s instruction, they both took the lower grades through a selection of kicks, holds, locks and takedowns that aren’t a normal part of the Karate syllabus.

A big thank you to Master Simpson, Joel and Jit for a thoroughly enjoyable and informative lesson.