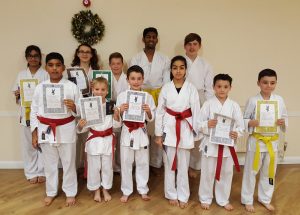 This was a solid grading with good spirit from the grading hopefuls.

It was quite a large grading and all the grading hopefuls passed.

The standout performances were:

Ethan Lane who showed very high levels of focus and determination, especially considering he is only 6 years old, to be awarded a 1st class pass for his red belt. 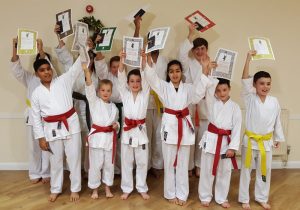 Liridona Spahija who was awarded her brown belt. This was despite not only picking up an injury during the grading, which she worked through, but also having to spar with two black belts at the end of the grading. It was clear that she put everything into her grading as she had to run to be ill as soon as the final “Yame” was called!

Congratulations againto everyone who graded!