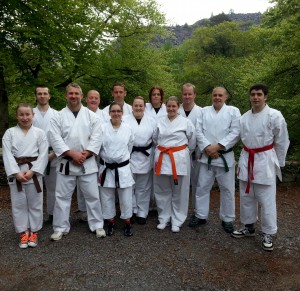 As Ogwen rolled around I was hit with a pang of excitement tinged with more than a touch of nerves. Heading down with John on the Friday evening gave me the chance to relax, drink and get a lay of the land before the course started on the Sunday. Saturday rolled around and I was feeling “a bit woo” but I managed to drag myself around the area to find out where the battlefield and the dojo was before sleeping off the alcohol and waiting for our other comrades to arrive.

Sunday started early with everyone getting ready for sparring and heading down towards the battlefield. The nerves really started to hit as I was standing around for everyone else to arrive. Upon everyone’s arrival we were all sorted into grade order before doing a light warm-up, after which we were paired up to do a bit of kumite training followed by sparring. The theme of the week was setting up the opponent, this included feints, moving off the line and other techniques. The change of environment proved to add additional challenges as keeping balance on a slope whilst trying to throw techniques proved rather difficult. The morning and afternoon sessions involved going through some of the Pinan katas and then applying various applications to the moves. This was an interesting way to learn the katas and really helped to understand how the Katas can be utilised.

Monday arrived and with this came yesterday’s pain and today’s exercise. It proved to be quite the combination. The battlefield session involved more Kumite training and another exercise designed to make the muscles weep, especially the abs. The next couple of sessions involved some more Kata training with Bunkai and also some Ippons. As the day came to a close we said goodbye to many of our numbers as they returned to normal life.

Tuesday started the way the previous two days had, with Kumite and Exercise. The exercise for this was Tabata. Nobody seemed to be sure of what this was until it was explained to be some sort of insane interval training program that can only have been conceived by a lunatic. Next came the Kata section progressed the same as before with myself and the other lower grades going through all the Pinans until they were burned into our memories. The last section of the day involved a No-Gi self-defence section. This included understanding the law around self-defence, assessing a person’s behaviour to determine if they intend to attack and how to defend yourself using a tactic called SPEAR to turn the a flinch response into a self-defence tactic that can then be used to subdue an opponent i.e. through a lock. This was an interesting section that shows how Karate can be combined with other components of self-defence to become a practical way of protecting yourself.

As Wednesday came I was disappointed that the end of the course had come around all too swiftly. Arriving at the battlefield I prepared myself for the last Kumite and Exercise which proved to be just as gruelling as the ones before it (who knew doing 55 burpees and 55 sit-ups was so hard?). Next was the Kata section with going through the five Pinans for the last time firmly cementing them into my memory. The last part of the day involved a bit more Kata practise before a mini Kata competition, which I managed to come first in against the other lower grades and a couple of brown belts. Finally came the end of the course which ended with some people obtaining their next grade, which I was surprised to be one of, and a farewell to all the new people I had met.

Before I knew it, the time had arrived mixed with excitement and apprehension I set off on the long drive to north wales for the first time. I had no idea what to expect but had heard stories!

Soon it was morning and time to get up and head to the battlefield. This was the part that I was most worried about as my old Shotokan style fighting probably wouldn’t help me! I actually thoroughly enjoyed myself and liked the tuition given to start us off. This proved to be helpful. I did mainly spar with people for Luton and I made a not to change that on day 2. After some rather hard exercise consisting of press ups and sit ups it was time for a break. I quickly found out why other people were facing the other way during the sit ups and decided to follow suit! It was a real experience fighting on very uneven ground and fighting against people I didn’t know.

After breakfast it was time to get into a GI and head down for session 2 x 2hour sessions. I found the basics very useful and the pinan kata and bunkai equally so. It opened my eyes to the subtle differences between kata in Shotokan and Wado Ryu, also the differences in application.

Overall a successful first day and a film and socialising I went to bed looking forward to the next day. 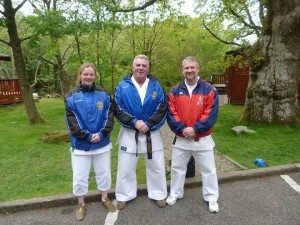 Started much the same as the first, some sparring techniques focusing on kicks followed by pairing up. I fought lots of people from other dojos rounding off with John who gave me a bit of softening up before my dip. The burpees and hollow rocks were an experience, a hard one nonetheless. The morning session was rounded off with a wonderful, ice cold dip in the river (apparently I flew a long way when they threw me in!!).

The first GI session covered Kushanku and bunkai along with some Khion Ippons, again this session was really helpful for me in consolidation my knowledge and applying the moves and the second session finished this off.

Even though I ended the course with a fractured finger (thanks Hayley”dimples” Blagg), I loved every minute of it, I learned so much which will help me in my new venture. I was gutted that I could only stay for 2 day and had to go home, but work duty called. I can’t wait for the next opportunity and hoping for an Ogwen 2015.

Thank you to all who arranged and helped to run the course as it was amazing.

It was May 2014 which meant it was time for the annual Ogwen Bank Karate course.

Driving up there this year I had a mounting sense of curiosity as it was the first year that Sensei Peter Spanton would not be running the course due to his recovery from a knee replacement.

Arriving on the Saturday evening gave me a chance to catch up with good friends and the other veterans and it was great to see Alan “Mad Doc” Wiles in attendance for the first time in several years. We had been given an itinerary for the week so we had an idea of what to expect over the following days but no idea as to what hollow rocks were.

Day 1 started and we were out on the battlefield. There was a lot of emphasis on exercises and before the fighting started we were shown a few ways to set up your opponent during a fight and were encouraged to use them in the sparring that followed. After a break we were in GI’s and we were out practising basics and kata’s and being shown some interesting variations on bunkai.

Day 2 found us on the battlefield when we found out what hollow rocks were. And how painful they could be. We paired up for more kumite and then saw our Ogwen virgins safely into the river as some of us were going home that day.

The first session covered Kushanku and bunkai that as well as some Ippons before we had to head back to Luton and reality. It was a shame that some of us had to cut the course short as some of the sessions that were coming up looked really interesting.

It was a great course, well structured and good fun and I look forward to next year.