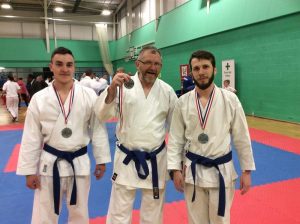 After the Higashi Nationals earlier in the year five Luton Lunatics decided that we should try an Open competition.

Stacey was up first with the Female 4th Kyu and Above Kata. She stepped on to the mat and performed excellent and powerful Pinan Sandan, unfortunately she lost her round to a seasoned competitive kata.

Next up was Me in the Male 4th Kyu and Above Kata. After a nervous start to my Chinto I settled into the competitive environment and finished strong, this was however not enough and I also lost my round to a strong competitor.

It was an interesting experience for us both as we have never done Competitive Kata in this sort of environment. Moving forward we shall endeavour to learn more competition style katas and hopefully we can come away with a medal in the next open.

With the kata over and done with it was time for Kumite. Adam was up first in the 14-16 5th Kyu and Below category. His category was a tough one as Adam was clearly one of the smaller competitors and his opponent one of the largest in category. He fought valiantly and stayed energetic throughout. Although he lost his fight he came away with a well-earned bronze medal and invaluable experience for his next competition.

The next event was the combined Senior -67kg and Senior -75kg. In this event we had myself and Connor.

I lost my fight to a well-seasoned fighter but got to practise some of the techniques we have been shown whilst training.

Connor has only been training with us for a few months but he bravely entered the competition and fought extremely well, commanding the mat and his opponent. Unfortunately, he lost his bout, gaining experience for his next competition where he will most definitely do well.

Next up was Eugene who had waited all day for his event, the Veterans. He fought well against his opponent and showed us all how competition fighting should be done and what we should aim for. Winning his fight netted him his well-deserved Gold.

The last event of the day was the Team Kumite. With a team of Connor Eugene and Myself.

Before stepping onto the mats we could see our opponents were much larger than us and probably had much more experience than Connor and I. The only way I felt we might win this one is if Eugene fought them all. Connor fought first, yet again showing great potential, managing to block and dodge hits but ultimately his opponent beat him.

Next up was my fight again I did my best and got in some hits but lost the fight unfortunately, as Connor and I both lost our fights this meant that Eugene was not given the opportunity to have his go on the mats. After waiting all day and only having one fight this would have been good to watch and learn from but I guess we shall have to wait till next time, when he once again comes out from retirement.