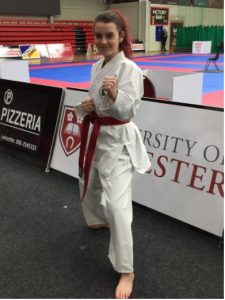 January 2018 saw our very own Liridona Spahija attend her very first competition in Leicester at the EKF Kyu Grade Championships. This is a competition that is only open to karate students below the level of black belt. Luckily for Donna this is a “local” event as she is now at University in the city. I, however, travelled up there at early o’clock in the morning with Eugene and Danni who were officiating at the event. Eugene, as we all know, is an old hand at competition judging, but this is fairly new to Danni who is currently training to be an EKF judge and this was her first competition as an official. So, that’ll be two our members judging at a national level.

Donna was competing on the Sunday and was up on the mat very early in the proceedings. She had prepared and practiced a few katas for the competition – pinan sandan, pinan godan and gojushiho sho (which is a shotokan kata). Donna was up second in her pairing and chose to perform pinan sandan. Unfortunately, the other competitor won this round which meant Donna was straight out of the competition at the first hurdle. This is sad, but also a vital lesson for anyone that chooses to enter competitions – it’s an old cliché but is very true “you can’t win them all!” This is the most important bit of advice I would give to anyone who competes or who has children that compete (in any sport, not just karate) – we must always take defeat not as a failure but as a chance to learn and improve on the next performance. The flip side of that is that the only failure is the failure to learn from the experience.

On the plus side, the competitor who knocked Donna out in the first round went on to win that category. So, this was partly down to performance on the day and the (bad) luck of the draw.

I’ll close with some words from Donna herself on the experience:

“The competition was so much fun. I was more nervous going onto the mat than I was actually performing my kata – I even managed to get one of the judges to crack a smile as I bowed! Even though I lost, it was still an enjoyable event because I learned so much about what it’s like to compete”