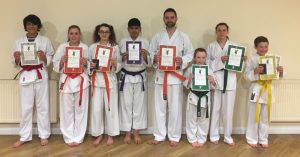 This grading was of a very high standard and all the hopefuls passed to get their new belts.

Performances of note went to:

Ethan Kiernan – who put 100% power and effort into his whole grading. He did so well that he double-graded to yellow belt.

Liridona Spahija – once again produced a textbook grading. After double grading earlier in the year, she was awarded her orange belt with a first class pass.

Katarzyna Mucha – who produced a very strong grading but unfortunately took an injury towards the end. She was determined to continue but the judging panel saw this was not feasible. She had already done enough to pass the grading and was awarded her well-earned green belt.

Congratulations to everyone who graded!