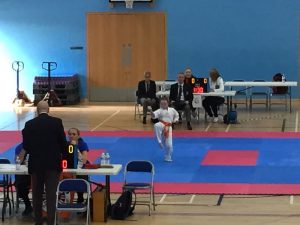 An early start saw me meeting up with the Garner family and their karate star in the making, Katie, at the Harlow Leisure Center for the BIKO Open Championships. A subdued Katie sat there with us while we chatted and I drank the first of my over priced frothy coffees of the day. There was a large number of people gathering in the foyer and the numbers seemed to be a bit intimidating, but I think Katie was just as excited as she was nervous.

We eventually made our way into the hall and took our positions as we tried to figure out where Katie should go after warming up and a voice on the tannoy announced the first batches of categories and the various areas they should go to. We managed to get her to the right place at the right time and then settled down to watch the proceedings unfold. 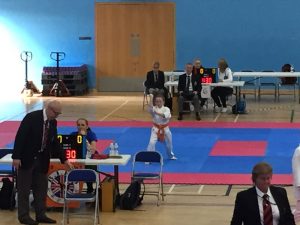 As it turns out, Katie was the first one up in her category and was amongst the first of the day overall to get started… And what a start it was! She confidently strode onto the mat when called and showed excellent etiquette. This was followed by a confident execution of pinan shodan and the judges’ marks showed how well this confidence paid off with scores of 6.8, 7.1 and 7.2. A cracking good start!

After everyone else had run through their first katas, Katie returned to the mat for her second kata of the day – pinan sandan. This was, of course, another confident display which resulted in scores of 6.9, 7.0 and 7.1. 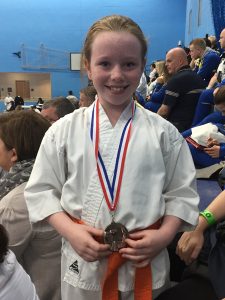 Finally, we were all chuffed to bits when it was announced that Katie had won bronze! Huzzah!

She certainly did herself, her family, and the club, proud today. Well done!

Now, the final words for this report go to our BIKO Open Championship kata bronze medallist herself:

“Today I competed in the BIKO competition in Harlow. I felt nervous and excited at the same time. I am glad I went as I came 3rd in my category against some really good competitors. It was worth all the hard work. I can’t wait till the next competition. And would like to say a big thank you to Simon and Eugene for their help and support.”