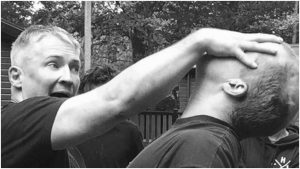 This year, the Luton delegation to the Ogwen summer course, was just three veterans – John Hurley, Jeff Archer and Simon Mills. But what we lacked in numbers we made up for in insect bites! I’m fairly certain John’s tally alone would have equalled everyone else’s added together!

Putting the antihistamines aside for one moment, this year’s course was a step up and a little sideways from previous years in that we now had 5 days of training in somewhat better weather with an added focus of a set agenda covering numerous subjects of interest to the students and fellow instructors. For instance, there was a session on ground work delivered by Michael Clancy and Ray Conway which, when you think about it, is an essential skill. We TRY to stay upright to fight, but in a real situation it’s not always possible to keep your feet, so this session gave us some essential skills to use when we find ourselves taken down and are struggling for survival. Being somewhat smaller in stature and size than most middle aged men I found this very useful – I now have some skills to use if someone dumps me on my back and sits on me!

Our very own John Hurley taught a session on the Wednesday “no gi” day –  a shorter training day focused more on theory and knowledge sharing. Many years of door work have given John a vast repertoire of extremely effective close combat techniques and they were very well received by everyone in this session. Especially by John’s uke, Jeff!

The “no gi” day also saw Steve Bell teach us about situational awareness. I didn’t realise until now how unaware I was of my lack of awareness. Very educational. Great stuff! Another highlight was Jon Dunn introducing us to the escrima sticks. Aside from an occasional knife/gun seminar over the years I’ve not had much opportunity to train with weapons, so this was a bit of a first for me. Jon and Michelle make this look easy, but coordinating two arms and two sticks is a lot harder that it looks when you are also trying very hard not to smash your knuckles! I look forward to trying this again at some point in the future.

Sadly, Sensei Spanton couldn’t make it to Ogwen for the whole course, but when he arrived on the fourth day he certainly brought his energy and fierce determination with him! The first half of the week was great, but the atmosphere and energy changed up a gear as soon as he arrived to put us through our paces, with everyone eager to impress our federation’s chief instructor! Naturally, we worked on the traditional basics and katas… and then had our minds bent out of shape, as is customary, with many kata bunkai variations and starting to the right or instant kata changes – as educational and entertaining as ever!

This year was another unique experience for me – last year I graded at Ogwen and earned my 1st dan. In previous years I was being assessed for kyu grade promotions. This year was the first time I had been to Ogwen without the worry of gradings or assessments. I was there to enjoy it, and to learn from the best while surrounded by the best! Although, I was a little apprehensive at first and it certainly felt strange lining up amongst the dan grades this year. It was time to take everything up a level and really try to dig deeper into what karate is all about, rather than just learning the basics. It might be a tired old cliche about black belt being when you really start to learn karate, but it is so true! So much more thought goes into everything I do now. So, whilst there was no grading pressure, I did feel that I had to show advancement from the level I was at when I passed the dan grading the previous year, to show to Sensei and the other seniors that I am still learning and keen to learn more.