A new year and another eventful week at Ogwen with Liridona Spahija, John Hurley and Jeff Archer. Honestly I had a few ideas of what to expect but what I didn’t see coming was me being delegated the nickname Jar Jar Binks! In the few days I was at Ogwen I had learnt a lot more than I had known previously as well as this I met a number of really nice people who also helped me improve my technique.

The first day was great; we had great weather but of course good things come with a price, which in this case was a tone of midges. John Spurgeon led the first session who included some sparring on the battlefield which was brilliant despite being on the receiving end of the attacks more often than not – I was able to spar with great fighters which challenged me and pushed me to stand my ground and not give up and carry on despite how tired I was getting. I took away at least one thing from the other fighters that I would adopt into my fighting style and I’m sure everyone was also impressed by each others skill set. 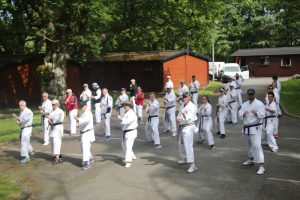 In the second half of the day we practiced our katas and did some bunkai with Steven Bell. We were split up into groups and applied the bunkai to the kata which I previously had trouble doing, but now it has become a lot easier to take a kata and turn it into a natural reaction to an oncoming attack, by the end of these sessions I honestly surprised myself, as I took into account how other people were doing their bunkai – I would feed off that and make it apply to me in a way that suits my build.

As a person who loves weapons, I was super excited for John Dunn’s session on using escrima sticks. At first I was very iffy about them it didn’t feel right for me as a weapon, however as we practiced it more I was beginning to like it, especially when it came to using the sticks against other people – though maintaining the rhythm of this exercise was very challenging, honestly it is easier said than done. I very much enjoyed the session and hope to use the sticks again soon to improve my skill and hopefully next time around my arm doesn’t feel like its about to fall off! 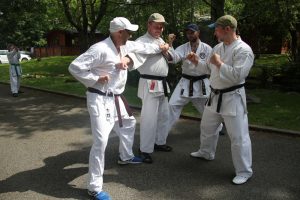 One of my favourite sessions was held by Michael Clancy. In Michaels sessions, we were doing a lot of grappling work as in reality in a fight people want to pin you down so you don’t move, this often happens when I’m sparring so it was very helpful to learn how to escape from another person’s hold on you whether it be a head lock or someone pinning you to the ground. This was a brilliant session because in real life it is going to be hard to stay up right on your feet – especially as a woman, there are circumstances in which you may be forced down so knowing how to escape and pick yourself up again has given me more confidence just in case such situations do arise.  I really enjoyed being thrown around as well as doing the throwing as well, practicing grappling tactics also widened my perception in sparring as I began to notice when I could take someone down and keep them there.

Another one of my favourite sessions was Steven Bell’s SPEAR lesson which was very eye opening, the fact that the simple opening of your hand and holding it at a 90⁰ angle could stop someone from getting close to you and all the advantages of that simple move gives room for take downs and other moves – I must say I was highly impressed by this and intend to use this a lot more. 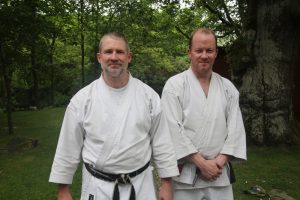 The most insane session that I very much enjoyed was held by our very own John Hurley who taught us a few close combat moves that he confirmed its effectiveness from working on the doors. Of course depending on my opponent I had to adapt these moves in a way that would work for me. This session was great because it really does help you make your moves a lot more natural so it becomes more like reflex rather than a static movement.

This trip was a lot of fun and I derived a lot of knowledge from the week at Ogwen. And of course because it was my first time there, I had to jump into the freezing cold river which was also very refreshing after a hard day’s training. As it was my first time going to Ogwen I was slightly intimidated by all the black belts at first, but the acceptance I received was really nice and because of this I  didn’t fear making mistakes as this is a learning opportunity and I did learn a lot from all the black belts and i am looking forward to learning a lot more from them.