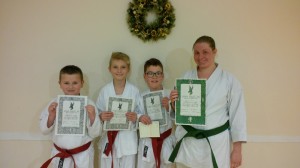 This was a small grading with only four hopefuls. They all impressed the judges significantly to be awarded their new belts.

The performance of the day went to Stacey Lever who, battling a cold during the grading, found herself short of breath. She was so determined not to show weakness that the grading panel had to order her out of the dojo to take a break when her lips turned blue! 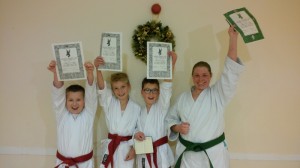 Upon her return, Stacey quickly made up for lost time by showing a fantastic display of blocks and counters and some excellent kumite. She was asked to spar with three black belts in succession and scored good points against them all! This showed the judging panel (and we suspect Stacey herself) a new side to her and just how capable and spirited a karateka she has become.

Congratulations to all who passed.