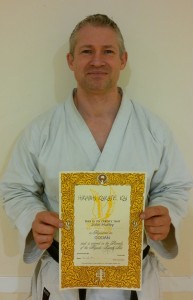 Sensei John Hurley was delighted to be awarded his Godan (5th Dan) at the December kata course run by Sensei Peter Spanton.

This is a huge honor and recognition of John’s contribution to Karate in general and Higashi in particular. Since he was awarded his 4th Dan in North Wales in 2005, John has been very busy with the following:

1) Running the Luton Higashi Karate Club which celebrated its 20th anniversary this year.

2) Teaching children in schools both before and after school almost every day of the week.

3) Featured in a number of best selling DVDs on Wado Ryu Karate and Self Defence.

4) Consistently trained and fielded successful teams, both in kata and kumite in competition.

John looks forward to continuing his contribution and is determined to live up to his new grade.