The WKU Open Karate Championships were held in Western Super-Mare. Since registration was at 9.30, it meant that this was an early start for the squad that went down. When we eventually arrived, despite the early start, I wasn’t really tired. Once the fighting categories started around midday, that’s when I started buzzing with excitement for when it would eventually be my turn. I got warmed up, I was feeling good about today. Some members went before me, but despite fighting well, they weren’t able to place.

Since I was next, I did feel the pressure to perform. Apparently, that pressure didn’t affect or phase me as I won my first round fight 8-1. Being the first fight I’ve won for the Higashi Squad, I was thrilled, but had to keep my cool since I knew that there was someone watching me at all times. It was the semifinals and I just snatched the victory with a 2-1 lead despite being stunned during the fight with a punch to the face. In the final, I won 3-1, one of the points coming from a takedown. I couldn’t 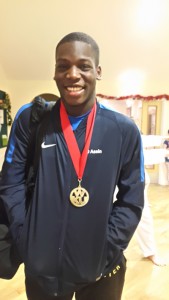 have been happier with how I performed, getting my first gold fighting for the federation.